Our lives get so busy that we often forget to connect how we feel with what we ate.
My energy levels are huge today, and I know it’s because of…

Today is day four of my 4-week health reset using Dr. Brooke Goldner’s hyper-nourishing protocol. If you missed the details about how I am resetting my health, check out my Day 1 video.

My energy levels are huge today, and I know it’s because of the nutrient-rich blender of smoothies I make in the morning and then drink through the day.

Our lives get so busy that we often forget to connect how we feel with what we ate. I can tell you that when I eat pizza, cheese, potato chips, fried chicken or ice cream, I don’t feel energized. I feel full, then tired, and sometimes even sick if I overeat (which would be often).

When I eat smoothies and salads with raw, dark leafy greens like kale and with raw vegetables and fruit, I feel light, clean and airy, like I could fly.

If you’d like to hear more, check out my Day 4 update on how things are going with my health reset.

If you’re looking for more energy and are tired of feeling tired, eat more raw veggies and greens to see what happens. Just this tiny step can make a world of difference.

If you really want to tackle your fatigue, check out Dr. Goldner’s site.

Today, my heart skipped a beat because I discovered there’s a toxin in mushrooms called Agaratine.
If you love mushrooms as much as I do, there are 2 things you’ve got to know about them.

Is there anything dangerous or unhealthy about mushrooms?

Do you eat them raw or cooked? How do you cook them?

If you love mushrooms as much as I do, there are 2 things you’ve got to know.

The first thing is about whether mushrooms are safe.

Today, my heart skipped a beat because I discovered there’s a toxin in mushrooms called Agaratine.

Luckily, it turns out that most of the toxin is removed when you cook mushrooms. What a relief!

So, where did I learn about this toxin?

There are a few sources I highly trust for nutritional information, and one of the best sources, based solely on research from medical journals, is NutritionFacts.org, created and run as a non-profit service to the public by Dr. Michael Greger.

If you’re curious about Agaratine in mushrooms, then check out the NutritionFacts.org video.

I absolutely LOVE mushrooms, and to me, they’re part of a healthy diet, which leads to the second thing you’ve got to know about mushrooms if you’re interested in long-term health.

Don’t get me wrong, I’m right with you on mushrooms sautéed in butter being amazing!

But, I want to enjoy my food without feeling guilty or being worried about my health.

To continue to love your mushrooms, without the extra fat bomb on your meal, you CAN cook mushrooms without oil. Yes. It is true, and that’s the groundbreaking , second thing you’ve got to know about mushrooms.

I won’t get into the different ways you can cook without oil (dry browning or sautéing in a little water or broth, for example) because tons of other online sources can show you.

I just want you to know that cooking mushrooms without oil IS possible, and that they are delicious. At home, I often make a quick stir-fry with veggies and brown rice ramen noodles, and I always include some tasty mushrooms in it.

There’s a unique, satisfying flavor in mushrooms that you can’t get from other vegetables (mushrooms are actually a fungi, but whatever; we lump them into the veggies category), so mushrooms are a must for me.

Most of us think we HAVE TO use oil to sauté everything, but the reality is we don’t.

Give it a try some time, but be forewarned; if you put oil/fats on a lot of your food, your taste buds will expect the fat when you eat your oil-free mushrooms. You may need to try this healthier way of cooking a few times before you love it like I do.

I deeply believe that changing from a less-than-stellar lifestyle to a healthy lifestyle takes practice until you get it right.
I won’t give up; I’ll keep trying. 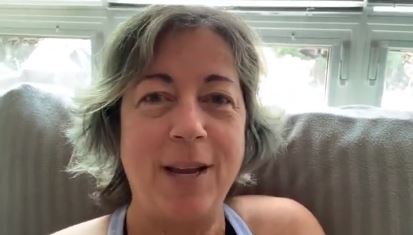 After a couple of months of celebrations and indulging, I find myself needing to reset my taste buds….again. Time to get off the wine, processed food and high-fat/salt combinations I crave.

I deeply believe that changing from a less-than-stellar lifestyle to a healthy lifestyle takes practice until you get it right.

I know I’m not the only person who commits to eating healthy food and exercising, starts off with huge enthusiasm and confidence, and then falters and goes off track, eventually giving up.

If you’re like me, you try and you try, and you keep “failing”. You feel like you’ll never achieve your health or weight-loss goals.

I won’t give up. I’ll keep trying, and today is Day 1 of a health reset using Dr. Brooke Goldner’s hyper-nourishing protocol.

Check out my video where I describe the details.

I wish you success on your own health journey. Remember to not give up. You’re worth the challenges and obstacles you face along the way.

Setting a personal goal, and working towards it, gives you a feeling of accomplishment. Check out my progress on my 1200 km walking goal.

I didn’t do as much walking in June as I did in May, but I still walked 25 times. All of my walks were outside, except for one which I did on my treadmill.

Scroll down to see my yearly total, to date.

In early June, I felt really energized, so there were a couple of occasions when I just felt like running, so I did. The second time, I ran 5.54 km without stopping!

It’s not my goal to run my 1200 km this year; my goal is to walk. However, I’ve learned to listen to my body, so if it wants to run, then running is what I’ll do.

My walks were varied and some more interesting than others. I walked in the woods, in my neighborhood, and one day I got a second walk in just as night was falling.

I bought a set of walking sticks to try them out. I liked them because I felt I got a better arm workout as I was moving. I’ve only used the sticks once, so I’ll have to try them more before I know if I really like them or not.

I feel so satisfied and have a true sense of accomplishment when I set a goal and then actually work towards it (as opposed to the initial excitement of a new goal, followed by procrastination). Even if there was a lull in my progress, like during the three days in a row I didn’t walk, I just kept at it.

Instead of looking at those three days as a failure and letting them turn into 5 or 10 days, and possibly giving up on my goal and giving up on me, I jumped right back into my runners and walked.

One of the things that holds us back from achieving our goals is we don’t do them as perfectly as we envisioned. Then we feel like a failure.

At least, that’s often the way it’s been with me.

Although my publicly stated goal is for the entire year, my unspoken goal has been to walk every day! Is that reasonable and doable?

It is, in the sense that waking is easy to do, but in another sense, our lives get busy and we make excuses, so maybe walking everyday is not as doable as I thought.

What might be a more sustainable goal is to try to walk 3-5 days a week. That way, if I walk 3 days…great; I met my goal. If I walk 5 days, that’s even better. If I walk those magical 7 days, well, then I’m a superstar!

But let’s get real for a minute. Life gets in the way sometimes, so I intentionally made my walking goal a yearly one instead of a weekly one. I don’t want to worry about how many walks I do in a week.

I want to look at my overall walking as a bigger picture, as a bigger lifestyle change. I can walk as often as I like, and I can walk for as short or as long a distance as I like. It doesn’t matter if I miss a day or two. I just need to keep moving and keep working toward my goal.

My 2021 yearly goal of 1200 km not only keeps me moving; it creates a personal challenge. When I get to Dec. 31 this year, I’ll have something to celebrate, even if I don’t meet my precise goal. It’s a win-win for me!

122.13 km  January (high number due to initial dedication and interest)

I’m past the half-way mark in terms of time (6 months), but I’m not quite at the half-way point for kilometers yet. I’ll keep working on it!

Before I sign off, I’d like to take a moment to congratulate you on any progress you’re making with your own body-movement goals. Even if you’re just at the stage where you’re considering a goal, bravo for you!